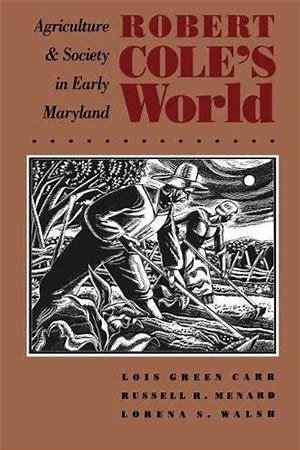 The 52 Ancestors in 52 Weeks Challenge, week one is Fresh Starts.

In honor of ancestors who’ve taken the huge step and traveled far and wide to make a fresh start, I’ve chosen my 10th great grandfather, Robert Cole. He came to the New World to get away from the religious persecution of the Church of England. He sold most of his possessions to make that journey possible and traveled to St Mary’s County, Maryland in 1653 (some say 1652) when the state was just getting started. He crossed “the Pond” with his wife, 4 children (two step children and two of his own children), and servants. He was granted many acres and used it to build a tobacco plantation.

You can read about him in “Robert Cole’s World” by Lois Green Carr. The book has a wealth of information gleaned partially from the inventory and will written by my ancestor in March 1662, just before his departure to travel to England for a visit, and from the good recordkeeping of the executor of the estate. Unfortunately for my ancestor and his children, his wife had died probably earlier that year, he died either en-route to England or en-route back to Maryland. Fortunately for historians, when his eldest son became of age he sued the executor, not because of any impropriety, only because it had been 10 years since his father had died and he needed to understand what the estate consisted of at the time. The judge ordered the executor, Luke Gardiner, to take a complete inventory of the estate and keep up with that inventory.

It’s sad that my 10th great grandfather only spent 10 years as part of this new horizon, that provided so much for many generations after him. His fourth child, my 9th great grandfather, prospered with his inheritance and continued to operate a tobacco plantation.